Bonnie asked about her Grandmother

I have recently found my Grandmother listed on the 1901 Ontario Census in the township of Wroxeter in Huron County.  She was born on August 5, 1899.  Her parents were George J Harris and Agnes J Harris born Jan 3, 1875 and Sept 21, 1877 respectively.  I was hoping to find where George and Agnes were born, and when their families emigrated and from where?  We know very little about the Harris side of the family so I was very excited to see this much!


Bonnie - A look at that 1901 census gives you more clues. For example George is recorded as George Jr leading me to suspect that his father might also be called George. He is Presbyterian so you can have a look for Presbyterian churches in the area where you might find births, marriages or burials for the family.

Look for Agnes in the 1880 Census for California - she is found with her parents and siblings in Vallejo, Solano, California

Armed with these new findings you should be able to trace the families further back in time.

Posted by Olive Tree Genealogy at 1:07 PM No comments:

Look for Siblings Obituaries for Info on an Ancestor

Deloris asked about her grandfather.


My maternal grandfather, John Russell Horne, b Nov 1877 in Reach, Ontario, Canada emigrated to Kittson, MN, USA in circa 1892 and disappeared from Hallock, MN, USA sometime in 1905 or very early 1906.  Can not find any evidence of his being in the USA after that date so am thinking he returned to his home territory but have been unable to find any information on him.  Any help you can give me will be greatly appreciated!

Well Deloris you sent me scrambling to find out what state MN refers to. It's easy to assume that everyone knows what you know, but the person you're asking for help might not know anything about USA state abbreviations. Like me. I'm Canadian eh.....

Okay so I now know it is Minnesota. I would check Minnesota newspapers for an obituary and death records. I will warn you about an entry for your grandfather on FindAGrave that might lead to confusion. His name comes up as being in a cemetery and there is a nice biography of him plus a death year of 1910. At first I thought I'd found his death and grave but nope. He is not buried there and there is no marker for him. So unless the person who put the memorial online has a source for that death year of 1910 you can't trust that information.

I see that in 1920 his wife is recorded as a widow in the Minnesota census but even that cannot be trusted as factual. She may have lied to avoid a stigma of being a deserted or divorced wife.

If he were my ancestor I would search for obituaries for all his siblings in hopes he is mentioned as being either alive or dead.

Posted by Olive Tree Genealogy at 4:41 PM No comments:

Google is Your Friend

Do you know where I might find a copy of the book "History of Wellington County" by J. Hutchinson?  It is mentioned in "The Scottish Pioneers of Upper Canada, 1784-1855 by Lucille H. Campey as a source. 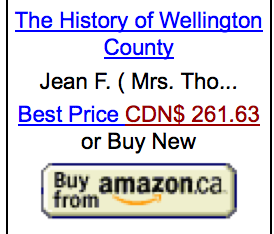 Sure thing. A Google Search for the book gave me the answer to your question. You can purchase a copy of The History of Wellington County

There is a cheaper copy (half the price!) available  here http://amzn.to/1MdVjLq

Posted by Olive Tree Genealogy at 5:00 PM No comments:

Email ThisBlogThis!Share to TwitterShare to FacebookShare to Pinterest
Labels: Books, Canada, Google, Ontario, Wellington County
Newer Posts Older Posts Home
Subscribe to: Posts (Atom)
Send your genealogy queries to AskOliveTree@gmail.com
Please note: I reserve the right to edit your query as I see fit, and to use only your first name on this blog. I also reserve the right to pick and choose the queries I answer. No anonymous queries please, you must include your name

All Comments
Learn how to write a good query in Good Query, Bad Query