I am trying to read information about Abram Judin on the ship manifest of the "Lapland", leaving Antwerp and arriving in N.Y. on Feb. 19, 1912 (line 22), but am having some difficulty.:

1. Abram lists his father's(my gr.grandfather's)name as "________ Leib Judin". I know my gr. grandfather's name was Leib (or some version of that) but evidently there is another name or word in front of "Leib" that I can't read.

2.I also can't read the place of origin (my uncle said Abram and his brothers came from "Sharkoysin" which may be modern day Sharkovshchina, but I'm not positive).

Hello M.R. Reading these old documents can be very challenging! Looking at the 1912 Lapland manifest on Ancestry.com

it is difficult to read but there are some tricks we can use to help determine words. First, look for letter formations in words you do recognize.

Let's take your question #3 Tailor versus Sailor It is difficult at first glance to tell if this is an upper case "S" or "T".

But if we look further down the manifest page we see the occupation "Seamstress" for several passengers. We can immediately see that the S in Seamstress is not the same as the first letter in your Abram's occupation. The S in Seamstress has a nice full loop. There are other examples of how this person makes his upper case "S" if you wish to have a look at the manifest. The start of Abram's occupation does not have the nice full loop and it has a "squiggle" at the base. It is a very sharp straight line - the lower case "t". You can view several other men on this manifest with the same occupation word. Thus we can say the word is most likely Tailor. 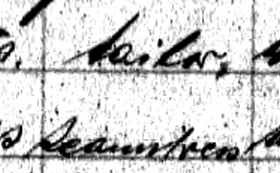 However we can seek more proof by checking his occupation in a census - have you found him in 1920 or 1930? I use
Ancestry.com

but you can also order census in to a local Family History Center, or view it through some libraries. You should look for a familiar word starting with "T" on this manifest - you may have to look on other pages but with any luck you will find one. Compare the "T" to the occupation word for Abram. I suspect you will find they are identical formations

Re Question 1: The word in front of Leib's name is a relationship word. If you check other passengers you can see such words as "wife, Mother, father" in front of the name of the person who was "nearest relative or friend" from the place the passenger left. (This is what is asked for in that column) Most of the relationship words are fairly easy to read - wife, mother, father, brother.

But the word in front of the name Leib Judin is not easy. I believe it is not the word "father" Compare the two words on the page. Their letter formations are not the same. There are other instances where this word is used on this page but it is a bit of a puzzler.

Do they look the same? Different? This will take you some time but with patience you should be able to figure it out. I followed my own advice and elimated upper case P as the letter - but perhaps it is lower case p? The other relationship words on this page appear to all start with lower case letters so it is most likely that this unknown word also begins with lower case.

As for question #2 I'm not familiar with Russian place names and identifying each letter of the town or village would take some time. I would suggest doing the same comparison as with the occupation and the unknown relationship word. Copy the name as an image. Trace it carefully. Compare one letter at a time with other familiar words on the manifest. In time you will no doubt have a very good idea of what it says.
Posted by Olive Tree Genealogy at 9:51 AM

Newer Post Older Post Home
Subscribe to: Post Comments (Atom)
Send your genealogy queries to AskOliveTree@gmail.com
Please note: I reserve the right to edit your query as I see fit, and to use only your first name on this blog. I also reserve the right to pick and choose the queries I answer. No anonymous queries please, you must include your name