Is This My Father?

Today's AskOliveTree post is a bit different. It's my own question about a photograph. I hope readers will be kind enough to share their own opinions.

My father died Christmas Day many years ago. I had just turned 14 one month before his death. Over time my memory of his face has faded.

There are very few photographs of my dad. Those few (a handful) that exist are grainy out of focus images. Except for one. I have a studio portrait of my father taken during WW2, long before I was born.

At an auction recently I bid on and won a group photo of soldiers who were in training in Guelph Ontario in 1942. My dad lived in Guelph and was in training there when he joined the Army. This is a cropped portion of that group photo. 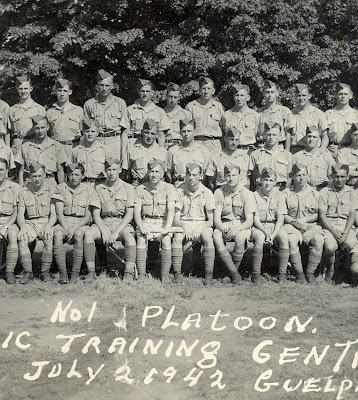 As soon as I saw the photo, I thought that the soldier seated to the right of the officer with the swagger stick (front row) could be my dad! It looks so much like him to my eyes. He is the 5th man counting from the right side.

I scanned and enlarged that soldier and have placed it below beside the WW2 studio portrait of my father. What do you think? Is it him?

I did notice differences as soon as I enlarged the photo. But my husband pointed out that the unknown man (left) has the sun in his eyes so he has shadows on his face that distort his features. He is also squinting a bit, further causing distortion. His face is turned slightly further to the side than the one I know is my father. 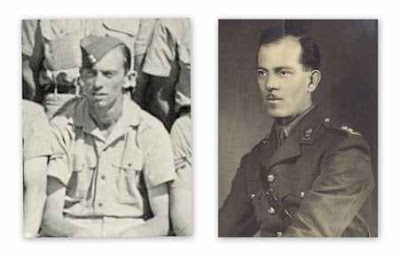 Please take a look and give your opinion. I want this to be a photo of my father so much that I am not sure I can judge objectively! Perhaps someone knows who the men were in No. 1 Platoon Basic Training in Guelph in July 1942. Even if no one knows for sure, your opinions and thoughts would be appreciated.
Posted by Olive Tree Genealogy at 12:30 PM

Add comment
Load more...
Newer Post Older Post Home
Subscribe to: Post Comments (Atom)
Send your genealogy queries to AskOliveTree@gmail.com
Please note: I reserve the right to edit your query as I see fit, and to use only your first name on this blog. I also reserve the right to pick and choose the queries I answer. No anonymous queries please, you must include your name